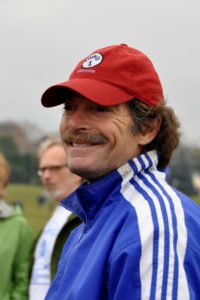 Tom Kaufman, also known as “TK”, is a former University of Wisconsin-Madison runner, coach of the Madison West Cross Country and Track teams, and has been an employee at Movin’ Shoes for many years.  Check out the amazing act of thanks that his former runners gave him, and the article written about it below.

Tom Kaufman started out on his usual Sunday morning run just as he has done for, oh, the past 41 years.

In the old days, Kaufman and a group of friends might run 15 to 20 miles. These days, they cover 11 to 14 miles through the University of Wisconsin Arboretum — part of Kaufman’s 50-mile weekly log.

The makeup of the group has changed over the years, but the running for the 63-year-old Kaufman on Sunday mornings rarely stops.

The Sunday after Thanksgiving, his regular run turned into a special moment for the longtime Madison West boys cross country and track and field coach.

Little did Kaufman know, but sons Zak and Noah, wife Dvorah and about 50 friends had a surprise in store for “T.K.” on Nov. 27.

“Everyone was in on the joke but me,” said Tom Kaufman, a 1971 West graduate who ran at the University of Wisconsin. “They must have been cackling.”

Every so often along the first part of the course, runners kept joining Kaufman’s running pack or running past him. Some waved, a couple tapped him on the shoulder. He knew the runners, many of whom competed at West, and didn’t think much of it. He just figured they were out for a run or home for the holiday.

“At that point, I’m totally oblivious to what’s really going on,” he said. “But I was thinking, ‘This is pretty cool. It’s like we’re having a West High School reunion. We have people from like 1998 to 2009 here. This is kind of fun.’ ”

When a group of about 30 joined the route — including Olin, Sam, Wilson and Tim Hacker, whose broken arm was in a sling — Kaufman was oblivious no more.

It was indeed a reunion of West runners, plus friends and family from ages 17 to 67, who wanted to thank Kaufman for his years of coaching. Kaufman, inducted into the Wisconsin Cross Country Coaches Association Hall of Fame in 2015, has led the West boys cross country team to WIAA Division 1 state titles in 2004, 2012, 2014 and 2016 and helped make cross country a popular sport at the school.

They took a detour from the run and had some bagels and shared stories at Movin’ Shoes in Madison, where Tom Kaufman said he’s worked for about 40 years.

“I’m the longest-tenured employee,” he said with a laugh.

Kaufman’s astonishment — “I was stunned,” he said — turned to delight.

“It was really neat for me that all these boys and girls, men and women, would come together to do this,” he said. “I think it was special for them, too, because it was a West track and cross country reunion. There were probably 30 different conversations going on.”

Zak Kaufman said he and Ian Aley, a 2003 West graduate, had talked about the possibility of springing such a surprise at the “TK 10K.”

“We wanted to celebrate the West cross country community and show appreciation for the impact that T.K. has had as a coach over the last 19 years,” Zak Kaufman said. “Ian and I first talked about the concept a year ago, initially thinking it would be something fun to do when T.K. retired. But then we were talking in August and we thought, ‘Why wait?’ ”

Zak, who lives in Switzerland, and his older brother, Noah, who lives in New York City, planned to come to Madison for Thanksgiving. Friends of Tom Kaufman were contacted via email and on Facebook.

“I thought maybe we’d get 15 to 20 people to show up, so the mass of alumni and family that actually joined for the run was really special,” Noah Kaufman said. “The whole thing was quite a surprise to my dad, who, even after there were about 10 of us from almost a decade of classes, still thought it was some sort of odd coincidence.”

The idea blossomed as more RSVPs were received. Aley then constructed a map detailing where runners would join the course.

“Ian architected the plot so that it seemed like a crazy coincidence that just kept getting crazier,” Zak Kaufman said in an email. “(Tom Kaufman) was a little surprised to see a fairly big turnout on Thanksgiving Sunday, including assistant coach Jim McCoy and one of the first guys he ever coached, Dr. Andrew Schroeder. Then starting with Peter and Colin Bugg, two runners at a time started randomly joining the pack.”

Runners from West graduating classes from 1999 to 2017 showed up, including Andy Han, who was on the 2004 championship team, Zak Kaufman said.

“And, like any reunion, it was neat to see the different paths everyone has taken — some are now parents, some live locally and others halfway around the globe, quite a few went on to run in college or have run marathons,” Zak Kaufman said. “Most of us still share a passion for running.”

The reunion capped an eventful fall for Tom Kaufman, also thrilled about the Regents’ most recent cross country title.

“It’s been a very good fall for us,” said Tom Kaufman, who, after the reunion ended, finished the final six miles of his regular Sunday run.