Founded in 1973, Movin’ Shoes has the experience and dedication needed to help local runners get equipment that works, in a friendly low-pressure environment.

Movin’ Shoes opened their first store on State Street back in the fall of 1973. Before this time, the only way to purchase running shoes was by mail order. The owners Roger and Herb each pitched in $500 to start the store and were only open 4 hours a week. Each customer was a friend to these men and they knew just about all of them by name.

In 1976 Movin’ Shoes moved to South Park Street and has remained there ever since. Karl Harter was hired and he owned the store until he recently sold to Jim Van Boxtel. Their friendship spans the decades of Movin’ Shoes rich history. Jim and his family have vowed to keep the same everyone is a friend feel and vibrant store culture that Karl so passionately created.

Movin’ Shoes moved to it’s current location at 528 South Park Street in July 2006, now in a bigger and better store that Karl dubbed “The Movin’ Shoes World Headquarters.” Movin’ Shoes continues to be “Madison and Wisconsin’s foremost running specialty store, providing shoes, support, and service for all kinds of runners!” 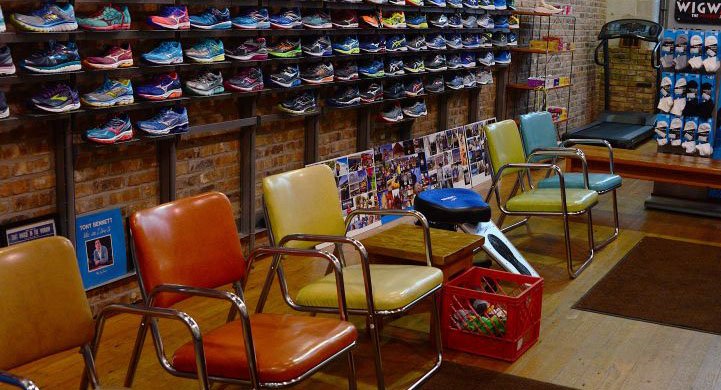 Movin’ Shoes employees are the most passionate and knowledgeable staff that you will meet. Each member brings years of running experience to the conversation. Stop on in to get fit by the best running speciality team in Madison.

Proudly serving the Madison community since 1973 Movin’ Shoes is Madison’s premier retailer of performance running footwear and apparel.  Our selection will meet your needs at every age or skill level.